Tim Chapman and Ian Firth highlight the carbon differences between civil structures and buildings projects, and propose that engineers work with their clients to target low-carbon outcomes, rather than just low-carbon structures.

In carbon strategy terms, there is a  big difference between infrastructure and buildings. While ‘build less’ is a useful guide for both – and is nearly always right to do for buildings – for infrastructure, sometimes it is just plain wrong.

In the UK, the Climate Change Committee’s 6th Carbon Budget1 has set out in greater detail than ever before the vital steps that we need to take to transform our whole society from one utterly dependent on fossil fuels to one that can operate at net zero.

We need to make this colossal transformation in a way that preserves living standards and basic rights such as respect and equality – partially because they are the right things to do, but also because broad and consistent public support for the measures needed is vital.

As well as lots of renewables, we need big new safe nuclear power stations to fuel our decarbonised electricity grid when the wind isn’t blowing; we need big new stations and new railways and electrification of old lines to encourage mode shift away from private cars; and we need whole new industries to produce low-carbon hydrogen, and to capture carbon from the air.

Making any of these a bit smaller without considering the bigger picture just increases the risk that we will tip into irreversible climate change that will plague living conditions for our grandchildren. We need to invest our scarce carbon wisely to create a new paradigm.

What matters are the outcomes rather than the outputs – how the asset will be used (and its impact on society), not just what the asset is. Often, in infrastructure, the lead designer is the engineer. It is therefore up to the engineer to steer the design team towards the most important decisions to achieve the best outcomes. Time is short and every decision matters now. 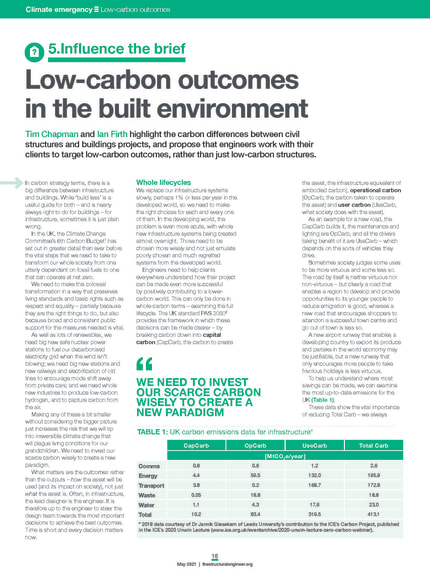