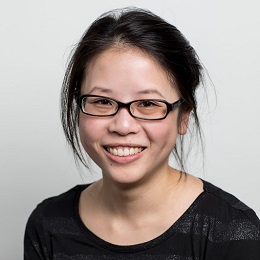 Monica Huang is a research engineer with experience in environmental life cycle assessment (LCA). Recent projects include the Wood Carbon Seminars, LCA of Katerra’s Catalyst Building, LCA of tenant improvements (TI), and the environmental impacts of earthquake damage for FEMA. She was also the lead author for the LCA Practice Guide. Past research experience includes diverse topics such as astronomy, electronic waste, and sea level rise.

I was halfway through my senior year as a civil engineering major at the University of Washington when I saw an ad for a course called “Structuring Efficiency” posted outside of the civil engineering computer lab. The ad was for was a seminar class in the Department of Architecture.  It vaguely had something to do with environmental efficiency. I was intrigued because I was interested in environmental sustainability and wanted to do something other than business-as-usual engineering after I graduated, but I didn’t know how to get there, especially during an economic recession when jobs were scarce. So, I signed up for the class, which was taught by Kate Simonen, and we learned about life cycle assessment (LCA) and did individual research projects related to LCA.  After the class ended, Kate reached out to compliment me on my work and asked if (1) I was interested in publishing the research and (2) if I was going to grad school. I ended up going to grad school at UW, still in the civil engineering department, getting a master’s degree in structural engineering to hide out from the recession. I was able to do research outside of the department through independent study with Kate, so I worked with her throughout my year-and-a-half in grad school, doing LCA-related research, and that was how I started working with Kate. 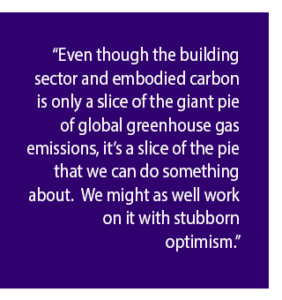 In the years after graduation, I would ask Kate to be a reference whenever I applied for jobs. That’s how she knew I was available in the summer of 2016 to work on a short-term research project.  After my time limit as a temporary UW employee was up, Kate was able to hire me more permanently to work on other research projects, and I have been with the CLF ever since. In a way, I am the CLF’s “oldest” employee. I was around when the Embodied Carbon Network was just getting started and there were just the three of us (Kate, Tina, and myself). Today, there are eight staff people and the embodied carbon community is bigger than I can imagine.

Climate change is also a bigger problem than I can imagine. I once read in a science-fiction book (Ringworld by Larry Niven) that climate change is an inevitable consequence of any developing civilization. Energy generation (conventionally) gives off heat.  Civilization keeps technologically advancing, and the human population keeps growing, so yes, climate change seems like a runaway train and the future looks bleak. However, my perspective shifted after I listened to a TED Talk by Tom Rivett-Carnac, who drew an analogy between the COVID-19 outbreak and the climate change crisis.

On the front lines of the pandemic, it may seem like healthcare workers are fighting a losing battle due to the rapid spread of the virus and lack of a cure. This was especially true at the beginning of the pandemic when fear and uncertainty were particularly high.  However, nobody would dare say that the efforts of healthcare workers have been futile or meaningless. In fact, he argued, “the courage and humanity those people are demonstrating makes their work some of the most meaningful things that can be done as human beings, even though they can’t control the outcome.” He went on to say that climate change will be “orders of magnitude worse” than the pandemic, but “choosing to face this moment with stubborn optimism can fill our lives with meaning and purpose.”

That’s why I find it meaningful to be where I am today, working on climate change with the CLF and the embodied carbon community. Even though the building sector and embodied carbon is only a slice of the giant pie of global greenhouse gas emissions, it’s a slice of the pie that we can do something about. We might as well work on it with stubborn optimism.

Connect with Monica on LinkedIn