This resource provides insight into why embodied carbon is an urgent problem, how Buy Clean poses a solution, and an overview of the key policy elements.

Buy Clean is a procurement policy approach that aims to fill a current gap in climate policy by incorporating low-carbon construction purchasing requirements that address the greenhouse gas emissions from construction materials into government purchasing.

Buy Clean policies use a combination of disclosure, incentives, and standards to leverage the significant purchasing power of public agencies to encourage a shift toward lower-carbon options in the broader construction materials market.  Buy Clean is an approach that can be applied at the federal, state, or local level and can also be used by private building owners.

Embodied carbon is a big piece of global emissions

Embodied carbon refers to the greenhouse gas emissions arising from the manufacturing, transportation, installation, maintenance, and disposal of building materials used in the construction of buildings, roads, and other infrastructure.

Building sector emissions are responsible for nearly 40% of energy-related global greenhouse gas emissions, with at least 11% resulting from the production of building materials. This number is even larger when considering non-energy-related emissions from the manufacturing of cement, steel, and other construction materials (see Figure 1). 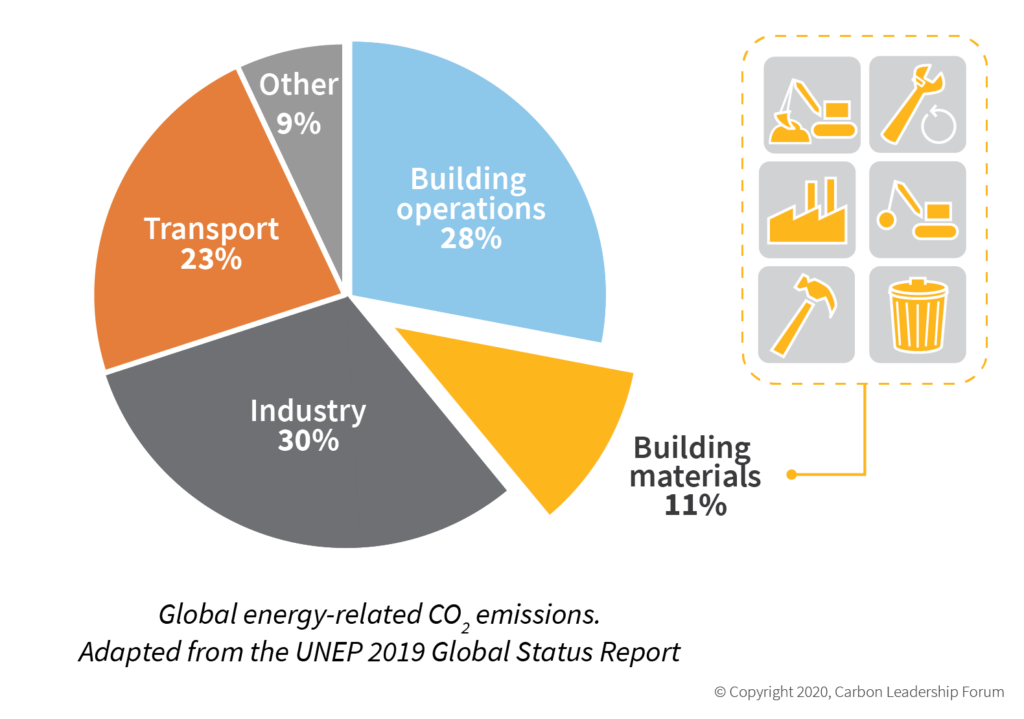 Embodied carbon is a gap in current climate policy

The majority of a product’s embodied carbon footprint is generated across its supply chain, which may be spread across the globe. Current climate policy efforts do not hold anyone accountable for reducing these emissions because they only focus on locally generated emissions. This enables one location to outsource its emissions to another, creating a ‘carbon loophole’. A 2019 report (by KGM & Associates and Global Efficiency Intelligence) found that approximately 25% of global emissions are embodied in traded goods that pass through this loophole.

Procurement policies are widely recognized as a key strategic lever for driving innovation and increasing the sustainability of the private and public sectors across the globe (UNEP; KGM & Associates and Global Efficiency Intelligence). Buy Clean is a procurement policy that addresses the current climate policy gap by accounting for a product’s emissions throughout its supply chain, regardless of location.

Procurement policies leverage the large purchasing power of governments – which typically make up 12-30% of a country’s gross domestic product (UNEP) – to standardize embodied carbon emissions reporting and reward companies doing their part to reduce emissions. This has the opportunity to impact a significant amount of emissions: 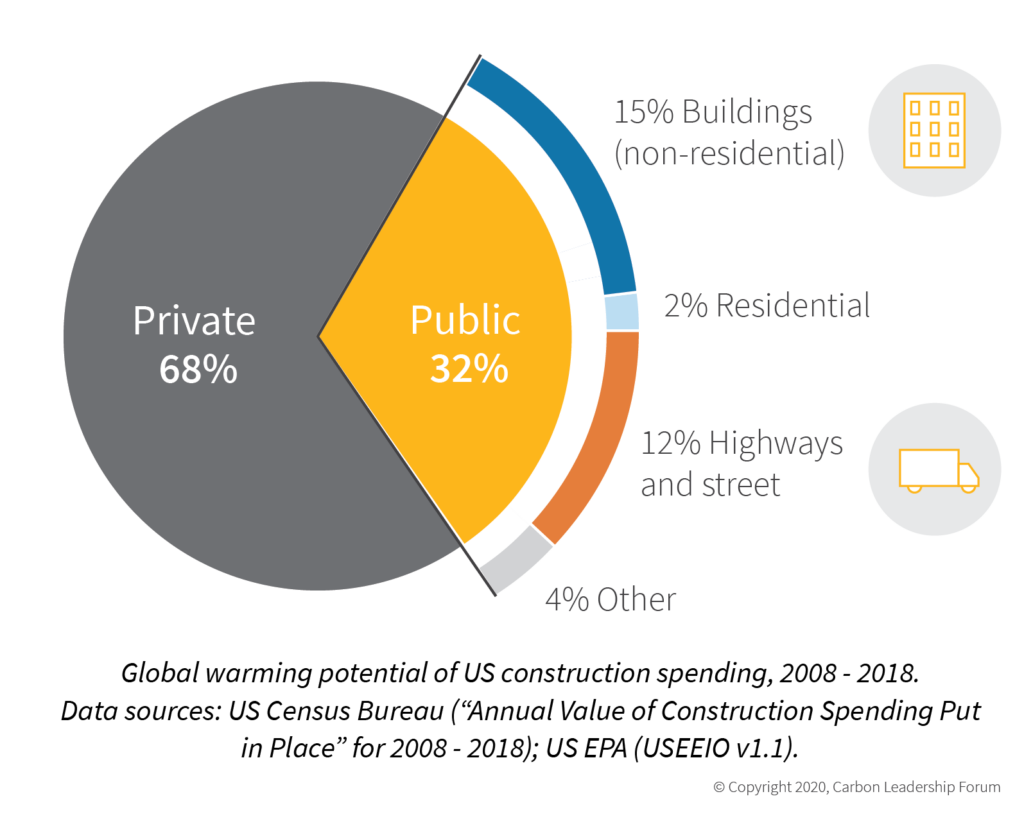 Figure 2. Relative contributions of the global warming potential of US construction for private and public projects). Data sources: US Census Bureau (“Annual Value of Construction Spending Put in Place” for 2008 – 2018); US EPA (USEEIO v1.1 data).

Due to the significant embodied carbon of public sector construction, Buy Clean policies have the potential to result in large emissions reductions.

For example, the State of Washington spent approximately $94 billion USD on construction between 2008-2018 (US Census Bureau). This translates to approximately 39 million metric tons of CO2e (using USEEIO data).

That amount of carbon is equivalent to the energy used by all the homes in Washington for more than 2 years, or to the annual impact of 8.4 million passenger vehicles.

These strategies have already been used on public sector projects to achieve large emissions reductions. Broader policies speed the process of turning that experience into common practice on public projects.

The Helen Sommers Building constructed for the State of Washington used a procurement approach similar to Buy Clean to lower the carbon footprint of the concrete used on the project by 27% compared to the Pacific Northwest average, saving over 1,300 metric tons of greenhouse gas emissions.

The concrete supplier, contractor, engineer, and architect all worked together to redesign the concrete mixes and they required embodied carbon disclosure in the form of an Environmental Product Declaration (EPD) for nearly every concrete mix (see Figure 3).  See the full case study (Dave Walsh, Sellen Construction) to learn more about the project team and their success. 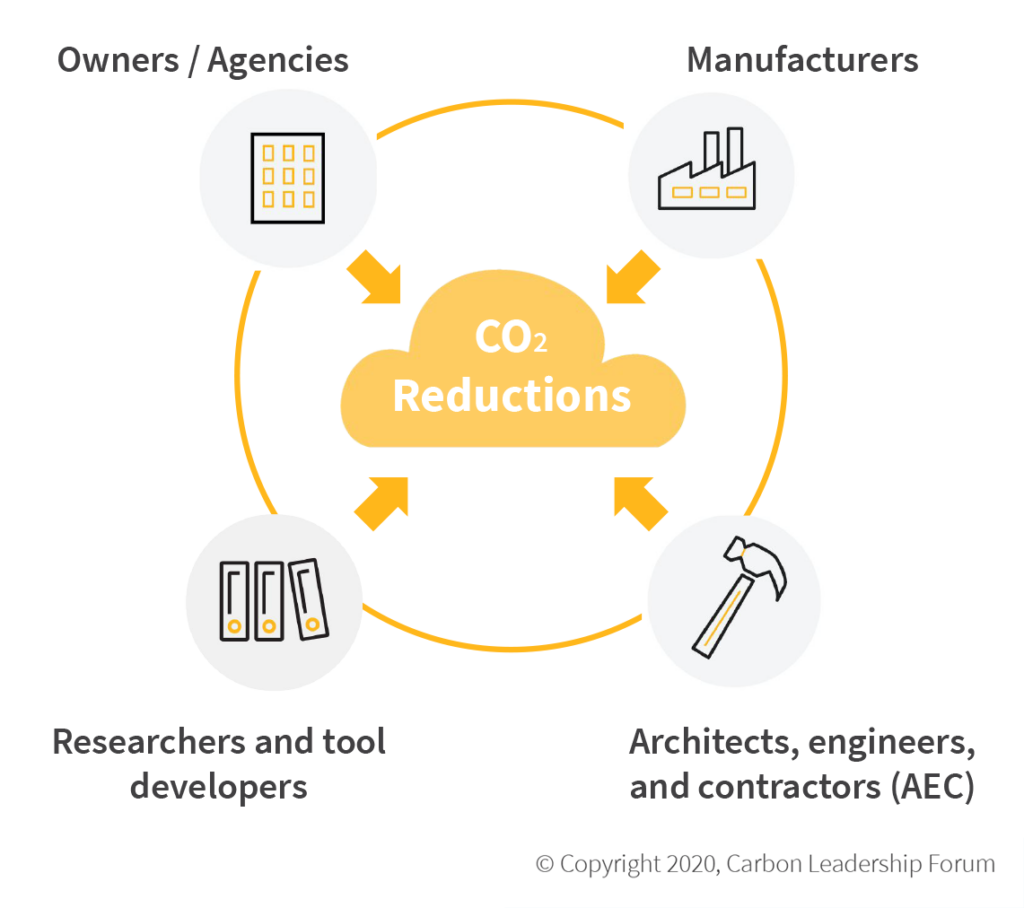 Figure 3. Embodied carbon reductions are achieved through collaboration and support from a range of key stakeholders.

Manufacturers and the building industry have developed a large range of solutions and tools for making and procuring lower-carbon materials.

The current gap in policy has created a market failure where manufacturers who have invested time and money into improving the carbon footprint of their products are not rewarded for that effort. Continuing to ignore these emissions will leave manufacturers in the United States unable to compete globally as Europe and other regions continue to adopt increasingly strict climate purchasing standards.

The first case of Buy Clean legislation in the United States was introduced and passed into law by the State of California in October 2017. Policies are now being explored at the federal, state, and local levels across the United States (see Figure 4):

Federal: A Buy Clean program was drafted in the Clean Futures Act in 2020, and clean manufacturing programs and incentives are included in Biden’s Climate Action Plan.

State: Iterations of Buy Clean were introduced in Oregon in 2017, Washington State in 2018, Minnesota in 2019, and Colorado in 2020.  A material-specific variation of Buy Clean that focused on low-carbon concrete incentives was introduced and passed in New York State (Senate Bill S8965) in 2020.

Figure 4. Embodied carbon policies are growing rapidly across the United States. Hover over the map to see the current status of existing and proposed Buy Clean policy legislation as of December 2020.

Buy Clean policies are typically composed of three core elements: disclosure, standards, and incentives. Disclosure is typically required whereas the inclusion of standards and incentives varies by region. In addition to these three elements (explained in more detail below), policies must choose which materials and projects are eligible, and when to implement each requirement (learn more in Steps to Develop a Buy Clean Policy).

Many Buy Clean policies start with structural materials like concrete and steel because they have a significant carbon footprint and a large range of solutions for emissions reductions. Requirements for standards tend to be phased in over a period of two to four years to allow time for adoption.

Buy Clean policies require measurement and disclosure of supply chain emissions in the form of environmental product declarations (EPDs), which are documents that contain information about a product’s environmental impact. Requiring disclosure encourages the construction materials market to produce more and better data, which increases the quality and quantity of data available. This enables private and public purchasers to identify and select lower-carbon products based on demonstrated carbon reductions.

Setting performance-based standards that set emissions (GWP) limits for eligible products allows for a technology-agnostic, market-based approach to industrial and building sector decarbonization.  Emissions limits may be lowered or reviewed at regular intervals to align with climate goals.

Policies can use incentives to encourage voluntary participation, support broader implementation, or reward high performance. Examples of incentives include financial support (tax incentives or other), technical support and training, and preferential purchasing (i.e. bid incentives).
Incentives can be provided early in the implementation of a new policy through a voluntary trial period or indefinitely.

An analysis of Environmental Product Declaration (EPD) definitions in Buy Clean and other North American procurement...

Toward a Low-Carbon Cement Standard

This working paper by the World Resources Institute (WRI) explores the idea of setting a low-carbon cement standard in...

Toward a Low-Carbon Standard for Steel

This working paper by the World Resources Institute (WRI) explores the idea of setting a low-carbon product standard...

Actors across the US federal government are taking steps to address embodied carbon. This document provides a summary...

The world currently emits 51 billion tons of greenhouse gases (GHGs) into the atmosphere every year. To avert the most...

The world currently emits 51 billion tons of greenhouse gases (GHGs) into the atmosphere every year. To avert the most...

The Role of Green Public Procurement

Public procurement accounts for an average of 12-30% percent of a country’s gross domestic product (GDP), resulting in...

The Carbon Loophole in Climate Policy assesses the embodied carbon associated with the production of goods that are...