A tool for calculating and comparing the embodied, operating and avoided carbon impacts and benefits of reusing, upgrading existing buildings vs building new buildings.

The project’s objective is to develop a simple, free, easy to use web based tool available to allow architects, engineers, policy makers and developers make informed carbon decisions on when to tear and build new and when to remodel and retrofit.

Renovating an existing structure typically has a much lower carbon footprint than building a new one because it reuses most of the carbon intensive parts of the building—the foundation, structure and building envelope. Despite this intuitive knowledge, we haven’t had a simple way to compare all the variables of embodied and operating carbon over different timeframes for reuse and new construction scenarios. Retrofitting an existing building to zero operating emissions will always be the lowest carbon option. But what if you can only improve its efficiency by 50% or replace it with a new zero operating building? Does it still makes sense to retrofit it or should you build a new, zero emission building? And how does climate and grid efficiency affect those calculations? We set out to create a simple, easy to use tool for comparing the embodied, operating and avoided carbon impacts from reusing and upgrading an existing building versus a typical replacement building.

What it does: Estimates the operational and embodied carbon emissions associated with reusing and upgrading an existing building or replacing it with standard new construction.

Who it’s for: policy-makers, planners, building owners, developers, heritage building officers, and others who are interested in a pre- or early-design, high-level assessment of the total carbon of building reuse versus replacement.

How it works: Users provide information in four categories: 1) general building information like location and occupancy use; 2) information about the renovation using drop-down menus to describe scope, such as percentage of structure that was upgraded and targeted energy use; 3) new building information, which selects from one of four typical construction typologies and target energy use; and 4) special conditions like poor soils. The calculator then calculates carbon emissions using built-in embodied carbon assumptions and data from the Commercial Buildings Energy Consumption Survey (CBECS) and Portfolio Manager. The outputs show total embodied and operational emissions over the specified timeframe for three scenarios: the existing building, the renovated building, and the new construction.

The estimator is currently undergoing limited Beta testing. Watch this page and join the CLF Community to see announcements of when the tool will be available to the public. 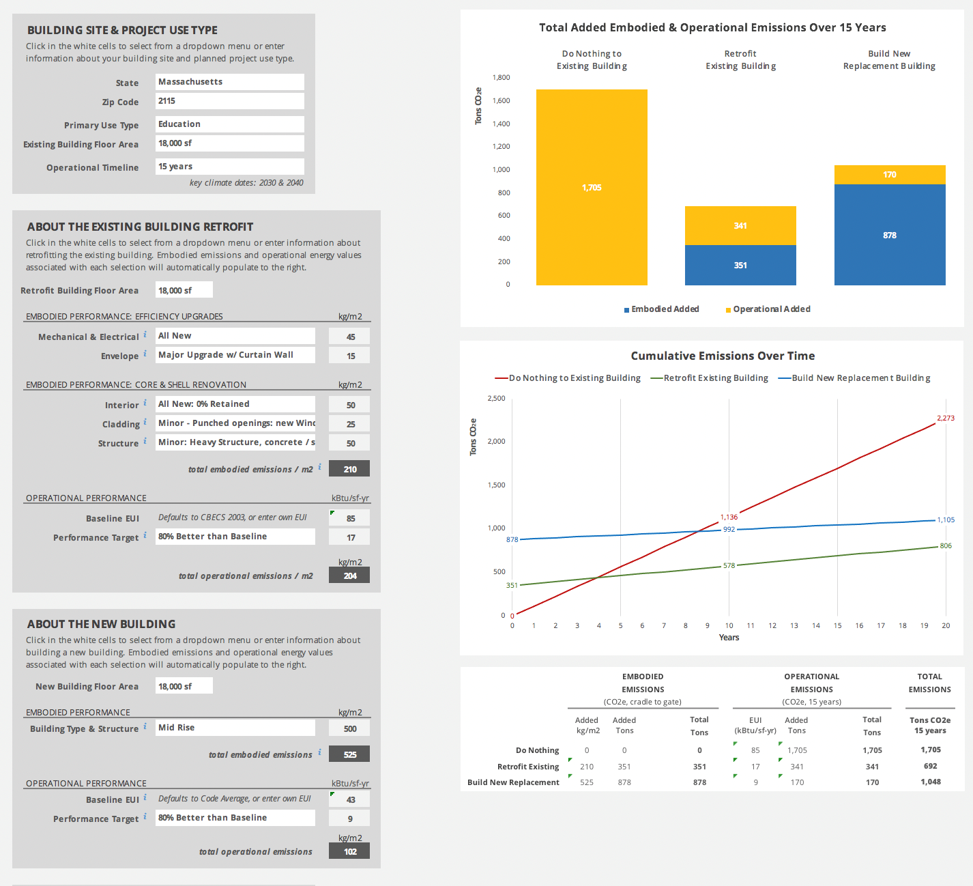