Cross-laminated timber building could help fight climate change. But its threat to ecosystems could make it a mixed blessing. 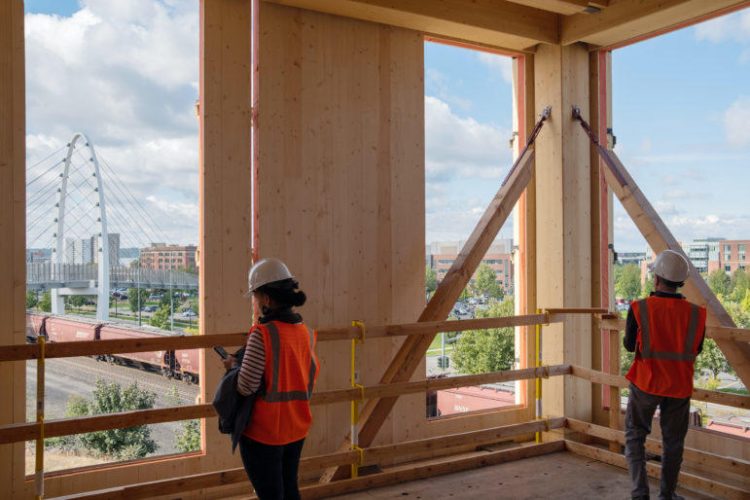 Last September, Washington Gov. Jay Inslee stepped to a lectern in a sprawling 270,000-square-foot factory outside Spokane and declared it the “best day so far” in his six years in office. Earlier that day, he had marched downtown as part of the youth-driven climate strike that united 4 million people worldwide. Now, he was in nearby Spokane Valley, heralding a new factory with an innovative product that, he said, answered the “kids’” calls for climate action.

The plant — one of the largest of its kind in North America — produces today’s hottest “sustainable” building material, cross-laminated timber, or CLT. Rollers and lifts shuffle and stack lumber, feeding a giant press that glues the assembled boards to form immense 12-foot by 60-foot panels. With up to nine stacked layers, each laid perpendicular to its neighbors, the panels are stronger — pound for pound — than concrete. The multi-ton panels are then precision cut to fashion them into floors and walls for office and apartment towers — prefabricated panels that will snap together like Lego blocks at the construction site.

What fired up Inslee was that those panels are designed to replace steel and concrete — traditional construction materials whose production accounts for about 13% of global carbon dioxide emissions. Cross-laminated timber panels, in contrast, contain the carbon-cutting dividends of photosynthesis: While growing as trees, the wood in the panels pulled carbon dioxide from the Earth’s atmosphere. And as long as a CLT building stands, that carbon should remain locked up in its walls and floors.